5 Most Important Cryptocurrencies (Besides Bitcoin)

When most people enter the crypto market for the first time, they buy Bitcoin—after all, it’s the best-known cryptocurrency, with the strongest market dominance. But what if you’re looking to diversify your crypto portfolio? Cryptocurrency is much more than just Bitcoin, and there are more than 2000 altcoins—that is, coins that are not Bitcoin—listed on Coinmarketcap.com. Plus common investment wisdom dictates that it’s important to diversify your portfolio and not put all of your eggs in one basket. Our recent article showed some of the benefits of buying altcoins. But if you don’t want to buy Bitcoin, how do you choose which cryptocurrency to buy?

This article examines at some of the most important altcoins; coins that you may want to look into if you wish to build a diversified crypto portfolio. These coins all present a compelling investment case, based on their unique characteristics.

It’s no accident that Ethereum is the second-highest coin by market cap. Since its launch in mid-2015, Ethereum has introduced several significant innovations to the crypto space. From the outset, Ethereum’s focus has been on distributed computing. Ethereum features its own virtual machine and programming language, Solidity, for the creation and execution of so-called “smart contracts.”

Smart contracts are a new type of digital contract, enforced solely by code, which have become a lot more relevant with the invention of blockchain technology. Although smart contracts are also used in Bitcoin, it’s fair to say that they were popularized and made vastly more flexible and accessible by Ethereum. Whereas Bitcoin focuses on remaining a reliable and secure store of value, Ethereum is positioned more as a toolkit for financial innovation and experimentation.

The Ethereum network provides a platform for complex smart contracts to be run over a decentralized blockchain; these are commonly referred to as dapps (or “decentralized applications”). Dapps are essentially smart contracts that can be created or run by anyone at any time, provided they have enough ether (ETH) to pay the dapp’s computational costs. While dapps are almost impossible to censor, they can be exploited by hackers if the contract’s code contains any bugs or vulnerabilities.

As there are many such applications running on Ethereum’s blockchain, including many other cryptocurrencies (which are known as “tokens” when running atop a parent network), this provides a steady source of market demand from dapps users and creators needing to buy Ethereum. 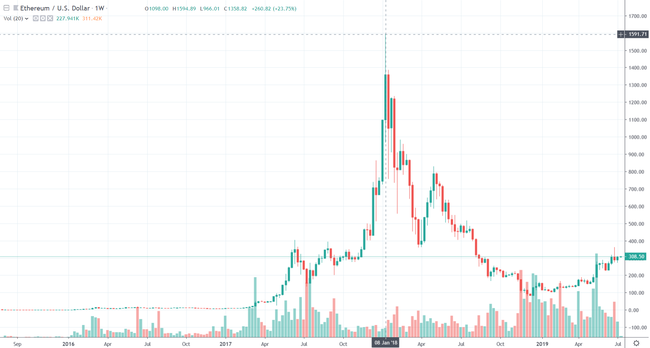 Fittingly, Ethereum’s creation was crowd-funded in mid-2014. Investors used Bitcoin to pre-buy Ethereum coins, which were then distributed the following year. Ethereum was thus conceived as an ICO; a funding model which it went on to popularize during its spectacular 2017 rise. Those who managed to buy Ethereum early during its ICO phase received some of the fastest and most explosive gains, even as judged by crypto standards.

As with Bitcoin, the success of Ethereum has inspired countless copycats, although in both cases the original remains the undisputed king of its respective niche. While the ICO mania has passed, smothered by failure, fraud, and regulation, Ethereum remains an interesting investment. Ethereum’s popularity and flexibility make it likely that it may play host to the next “big thing” to stir up a mania; in which case, expect Ethereum’s value to skyrocket once again.

If you looked through the list of support cryptocurrencies on Firmdrex and noticed Ethereum Classic, you’d be forgiven for wondering, “Should I buy Ethereum (ETH) or buy Ethereum Classic (ETC)?” As the name implies, Ethereum Classic is very closely related to Ethereum, sharing most of its codebase and its blockchain - at least up until July of 2016. It was at that point that ETC split off from Ethereum, in what’s known as a hardfork.

As a result of the hardfork, anyone holding ETH before the fork date was given an equivalent amount of ETC on that blockchain. The reason for the fork relates to a point alluded to above; that Ethereum smart contracts can be exploited if they contain imperfect code. This occurred with a major Ethereum investing project, known as The DAO, which got hacked for approximately 3.6 million ETH. Ethereum luminaries, notably Vitalik Buterin, elected to reverse these events by altering Ethereum’s blockchain.

These events led to objections from what would become the ETC community, on the grounds that blockchains should be immutable (unable to be altered) and decentralized (unable to be defined by any individual or minority group). Many future ETC supporters also argued that “code is law,” hence if The DAO’s smart contract code allowed for funds to be drained, then that was an acceptable thing to do within that code’s context. Unhappy with the decision, ETC forked off to their separate chain, with the stolen funds retained by the DAO attacker.

Although Ethereum Classic has far less mining activity and thus less security than Ethereum, it’s nonetheless an interesting coin. It’s able to host just about any application running on the Ethereum network without much conversion work required. Thus, if Ethereum encounters any issues - such as occasional high fees and slow transactions due to network load - then ETC offers an appealing alternative. ETC is also pursuing divergent development goals to Ethereum, such as a forthcoming alteration to a fixed rather unlimited issuance of tokens, which may have far-reaching economic consequences.

Bitcoin Cash is similar to Ethereum Classic, in that it’s a hard fork of Bitcoin. BCH forked away from Bitcoin’s blockchain in mid-2017 due to disagreement over the optimum way to scale Bitcoin. BCH has gone on to follow a markedly different development path, which emphasizes larger block sizes over Bitcoin’s secondary layers.

We covered the history of BCH and how it differs from BTC in a recent article here on the Firmdrex blog. To boil down the investment case for BCH; in the event that Bitcoin fails, BCH is able to absorb its entire hashrate as it uses the same mining algorithm. BCH also has lower transaction fees and generally faster transactions across its base layer.

Launched in late 2011, Litecoin is the oldest major altcoin and remains near the top of the crypto market cap rankings. Litecoin is a Bitcoin fork and remains similar to Bitcoin, although Litecoin has block times roughly 4 times faster than Bitcoin, a larger supply cap of 84 million LTC, and a different mining algorithm.

Litecoin’s fork to the scrypt algorithm was intended to allow home users to continue mining after the advent of Bitcoin ASIC mining equipment. However, ASICs were eventually developed for Litecoin mining too. Litecoin is currently the 3rd most secure coin, after Bitcoin and Ethereum, based on the expense of a mining attack on its blockchain.

Litecoin’s codebase remains similar to Bitcoin’s, to the extent that Bitcoin improvements are regularly ported across to Litecoin; sometimes even appearing first in Litecoin as in the case of Segregated Witness. Litecoin also incorporates the Lightning Network and atomic swaps have already been successfully demonstrated between Bitcoin and Litecoin.

Litecoin has had many years to establish itself and grow its economy organically. LTC is widely supported and featured on almost all exchanges which allow one to buy cryptocurrency besides Bitcoin.

Monero is well-known as the premier “privacy coin,” or cryptocurrency focused on financial anonymity. Like the cryptocurrencies mentioned above, Monero relies on miners to process its blockchain, however XMR differs in that it’s impossible to tell where transactions originate from or are sent to, or even how much is sent. These properties make Monero excellent for conducting online business with maximum secrecy. Monero is also one of the few altcoins whose code and design has received praise from experts in the Bitcoin development community.

Note that firmdrex does not currently offer Monero. To see more of the altcoins firmdrex offers, visit our cryptocurrency page.